Matthew Hussey is one of the most popular dating coaches for women. And people pay $10,000 an hour for 1-on-1 private coaching with him.

Professional help for “dating” has been around as long as there has been dating. And in the past couple of decades, dating and relationship coaches have become the ones to contact if you need some guidance. 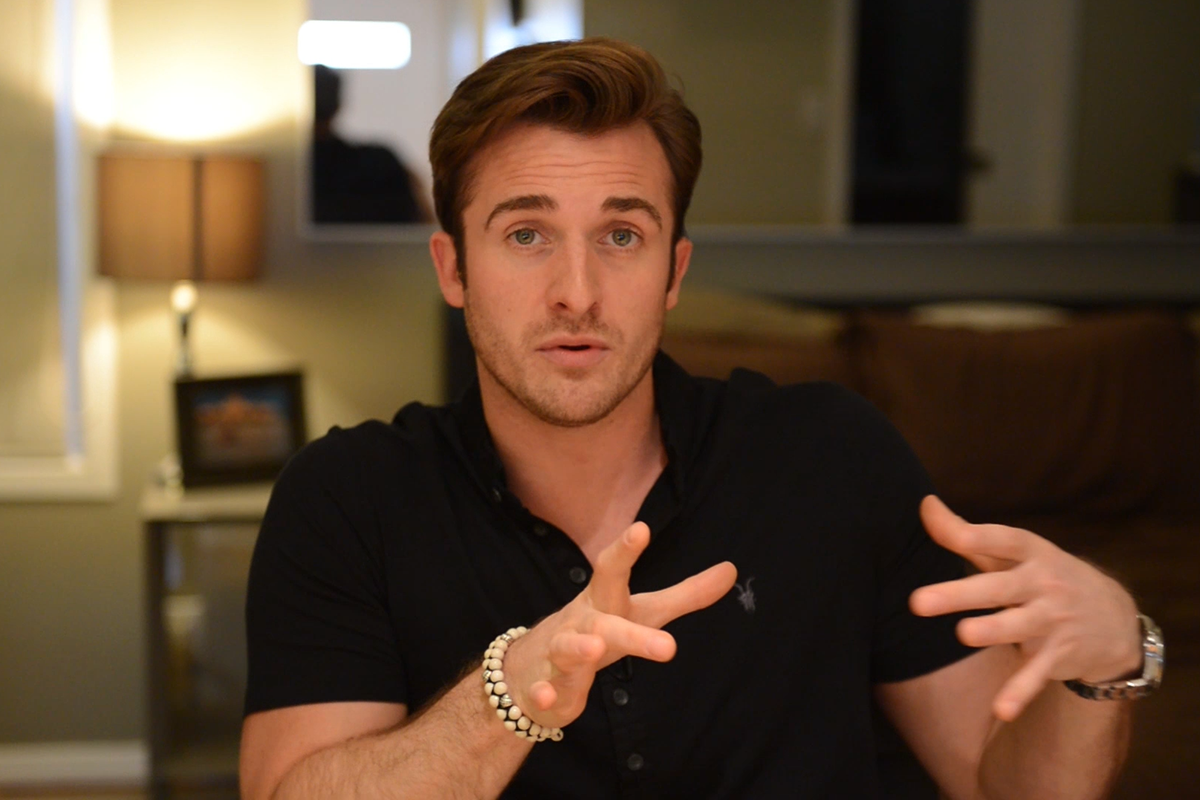 Today, it’s not that hard to find a dating coach who fits your budget and needs. You can expect to pay anywhere between $100 to $1000 per hour of 1-on-1 coaching - depending on your location and coach’s credentials.

And then there’s the elite few who can charge thousands of dollars for a single hour of coaching. There’s not a lot of people on this list, but one that stands out is Matthew Hussey. He charges ~$10,000 (~£8,000) for an hour of 1-on-1 coaching with him. With a price tag like that, it’s normal to wonder what makes him so special.

Who is Matthew Hussey?

Matthew Hussey is a British dating and relationship coach with more than 7 million online followers. He’s also a New York Times bestselling author (Get The Guy: Learn Secrets of the Male Mind…), a columnist for Cosmopolitan magazine, and has made several television appearances as a dating expert/guru. 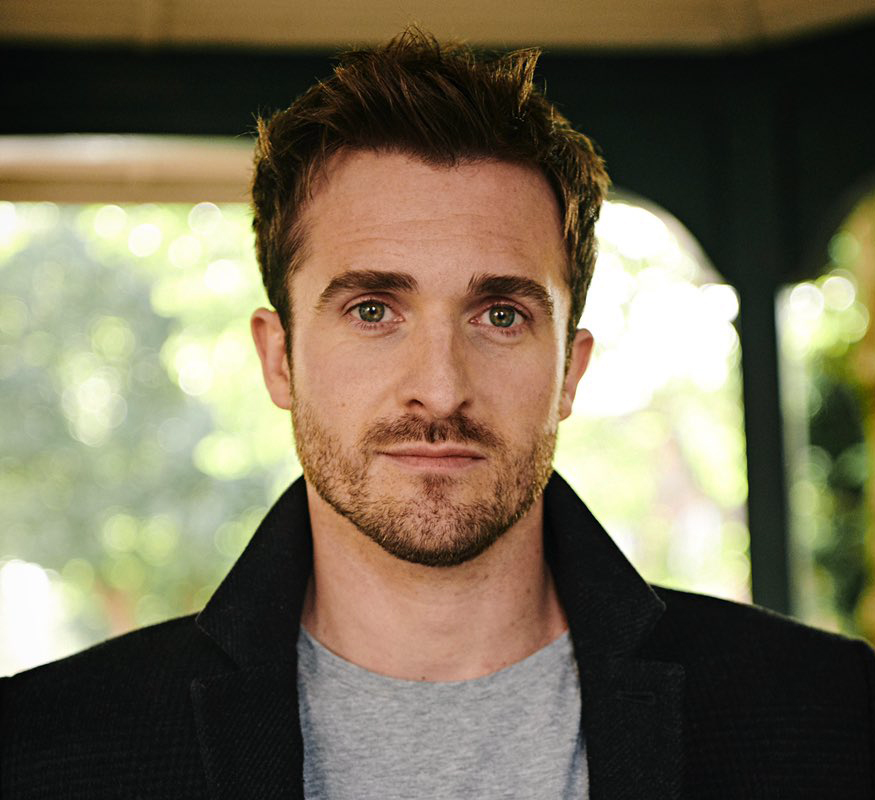 Though he started out as a coach for men, his popularity really boomed once he started primarily focusing on coaching women. He has his own program that he sells on his website, and he regularly holds coaching retreats for women which cost thousands of dollars to participate in. His biggest audience is on Facebook where he regularly posts videos and posts to his 4.2 million followers. And on YouTube, he releases a video every week for his 2.15 million subscribers.

According to him, he isn’t a self-help guru. He says his goal is to give practical, no-nonsense advice to a generation of women that has more opportunities than ever before but struggle to find lasting relationships. He is sometimes criticized as being old-fashioned for talking about men and women “as though they are from different planets”. But he has always claimed that he bases his coaching and advice on his own observations, especially from when he coached men.

Why are women going to him for dating advice?

It’s often the first question someone asks when they hear about Matthew Hussey. You’d think that women would prefer getting advice from other women, who have actual experience dating as women. And there’s certainly a group of women that only take advice/coaching from other women. But there are several reasons why Matthew Hussey has been able to establish himself as so popular among women.

Most Dating coaches are men

A majority of individuals giving professional dating advice happen to be men, irrespective of their audience’s gender. This has led to the most popular dating coaches for women also being men, not necessarily because of what the audience prefers, but just because there are a lot more men in the industry.

Matthew Hussey actually started out coaching men. And found moderate success with it, too.

Most people appreciate the opposite sex’s input when it comes to dating. A lot of women are unsure of what guys want and what they’re thinking. So it can be comforting to know the men’s point of view. 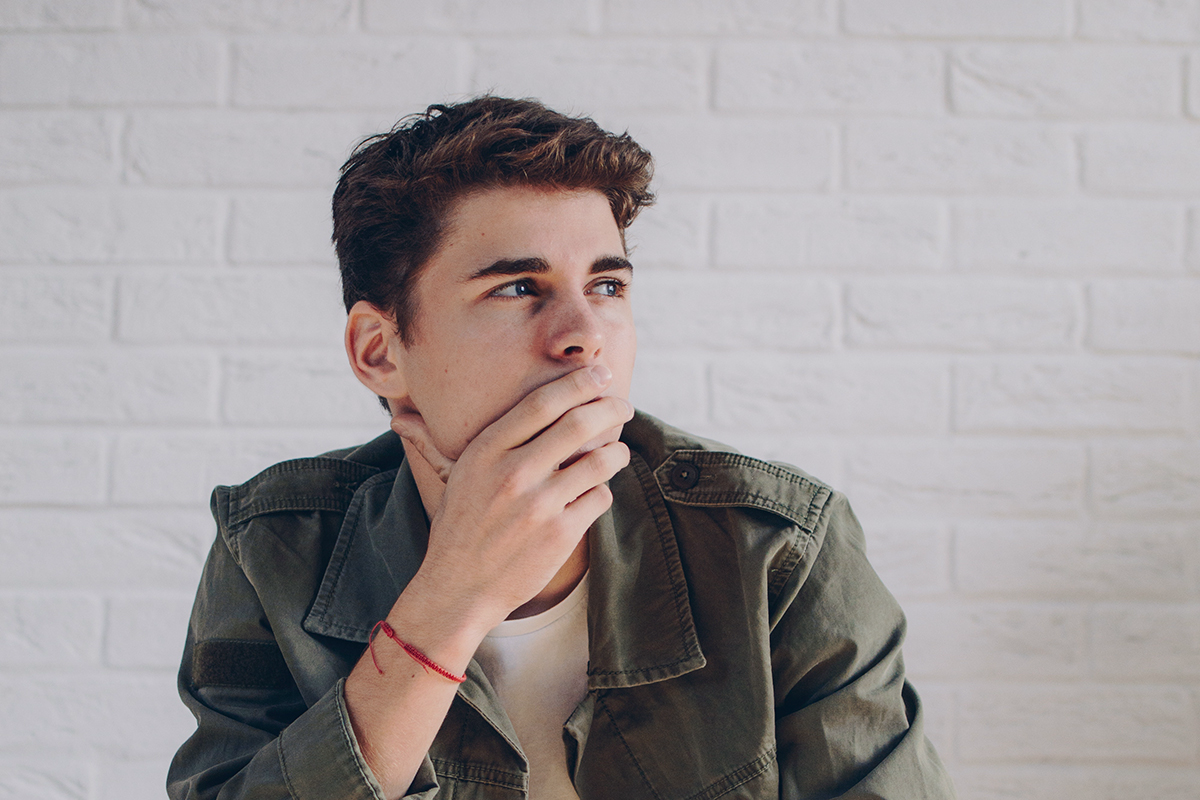 Hussey is able to satisfy that curiosity and can come across as more credible because of this. A large part of his success is that he goes into decoding the “male psyche” - what men want, what they’re thinking, how to gain their interest, etc - from the perspective of a man. His lessons wouldn’t feel the same if they were coming from a woman.

His book, “Get the Guy: Use the Secrets of the Male Mind to Find, Attract and Keep Your Ideal Man,” and his “Get the Guy” program dive into how men think and act, their vulnerabilities and fears, and ultimately help women feel less intimidated about dating.

Emphasis on seeking connection and self-worth

A lot of dating advice and coaching centers around the actual date, primarily leading up to the first date. Hussey stood out from the crowd by emphasizing the pursuit for connection over just being able to date any guy.

He gives a lot of advice covering how romance itself shouldn’t be the goal, but instead to focus on finding someone who is right for you. That a high-value woman doesn’t have to actually prove that she’s desirable to a guy.

In a landscape saturated by advice on “how to gain approval”, his take of “how to form connections” with a dash of “staying true to yourself” was a breath of fresh air to most.

When there are hundreds of people you can turn to for advice, it’s hard to know where to start and who to trust. Most of us rely on mass media and magazines to point us in the right direction.

Hussey has made numerous television appearances and is currently the dating expert on ABC’s What To Text Him Back. Over the years, he has been featured in lots of print and TV interviews and has also been a columnist for the Cosmopolitan magazine since 2015. He has even been endorsed by celebrities like Eva Longoria and Tyra Banks. He was even dating Camila Cabello for a while. 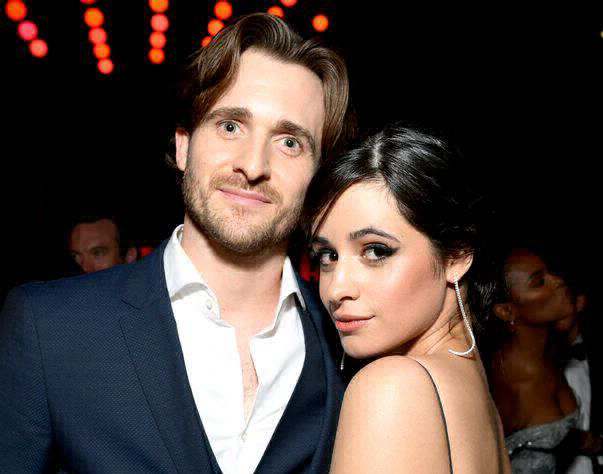 All this has gained him a lot of audience and credibility over the years, which he capitalized by gaining a massive following across social media - especially Facebook and YouTube, where he regularly posts content and engages with his audience. Eg. On YouTube, he posts a video every week, and almost all get over 100K views, with some of his most popular videos having tens of millions of views.

Nowadays, dating is synonymous with online dating. It’s a complicated landscape to wade through and most of us don’t know where to start. Whether it be what app to use, or what text to send, or how to tell if someone is stringing you along over text - the average person has a lot more things to worry about dating today than a decade ago.

Hussey places a lot of focus on actionable step-by-step tips and will even tell his audience what to say/text word-for-word, which can be very helpful for women who lack experience.

Some of his most popular videos on YouTube are - “3 phrases that make a man fall for you,” “3 texting secrets men can’t resist,” and “the #1 way to respond to sexual texts,” where he goes into detail about each.

He’s a good looking guy who talks smooth. Not that hard to see why women would be drawn to him. In fact, he is often described as having “movie-star looks” - generally from his critics, who like to claim his success has mostly do with his looks. 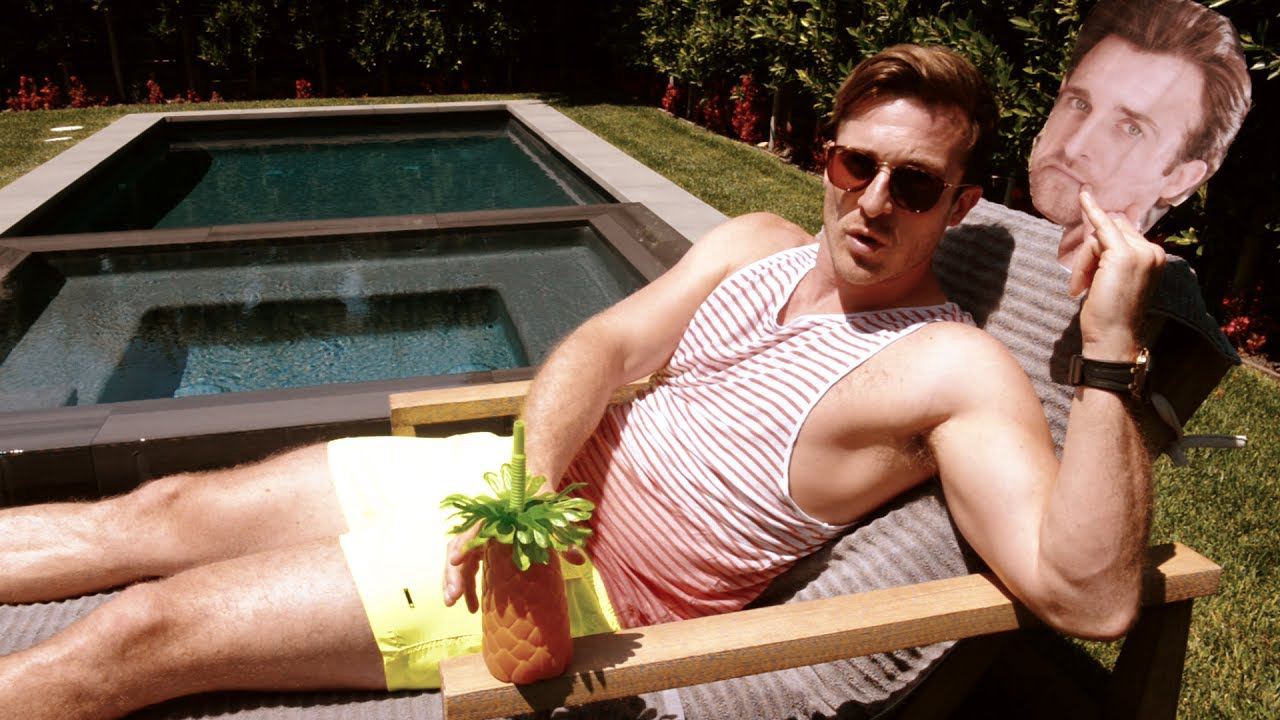 But it goes beyond the superficial. His charming personality and physical attractiveness automatically give him more credibility since one would assume he has more experience with women, and he also provides a “model” for his audience - the kind of guy they can aspire to be with.

The looks and charm help with more exposure, too, as he’s regularly approached for TV appearances and to be part of shows.

We’ve gone into who Matthew Hussey is and why he’s so popular, but none of it particularly justifies the price tag of his 1-on-1 coaching. After all, you will probably invest dozens of hours into coaching, which would potentially make this a 6-figure investment!!

Before we go further, it’s important to remember that this isn’t the only advice/coaching he provides. He tries to serve a huge range of audiences.

He regularly uploads videos and blog posts for his online followers. While these are pretty generic when compared to actual coaching (and they are by no means a replacement for actual coaching), he does put out a lot of decent information, especially since all of it is free to consume. 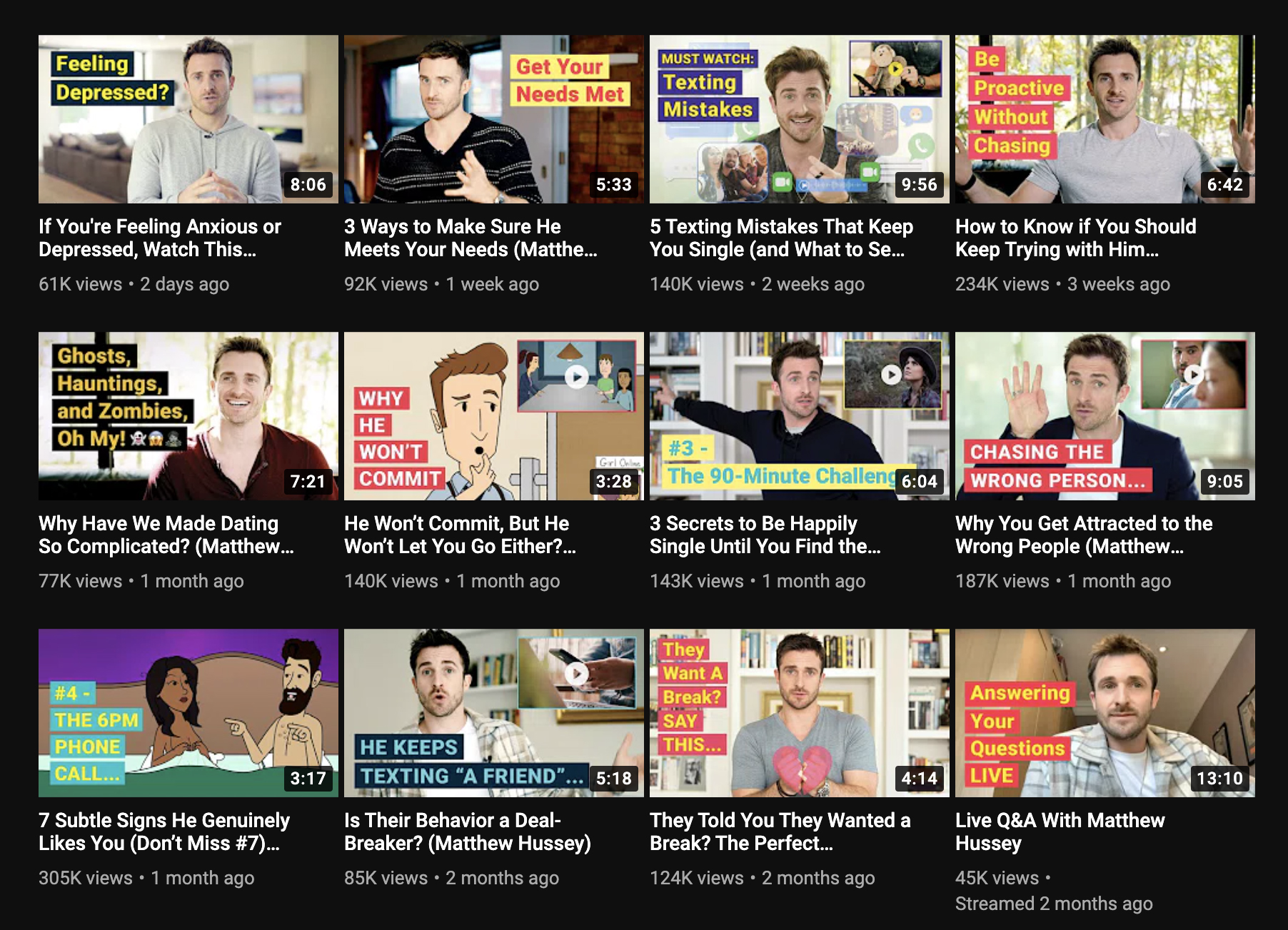 And he is pretty consistent with this, eg. he uploads at least one video a week on Youtube.

“Get the Guy” book

His book, “Get The Guy - Use Secrets Of The Male Mind To Find, Attract And Keep Your Ideal man,” was a New York Times bestseller and has a lot of positive reviews. The book guides women from beginning to end - landing a first date, establishing emotional intimacy, playful flirtation, bedroom tips, etc.

He also sells many online tutorials and programs under his “Get the Guy” brand, which range in costs from $7 to $300. Women from all over the world (primarily the US and UK) purchase these programs and participate in his online community.

He runs a 6-day coaching retreat twice a year in Florida - and charges ~$4,000 per head. And about half of the participants fly over from the UK. Recently, he has also started offering online retreats via his website, which are more accessible in price. 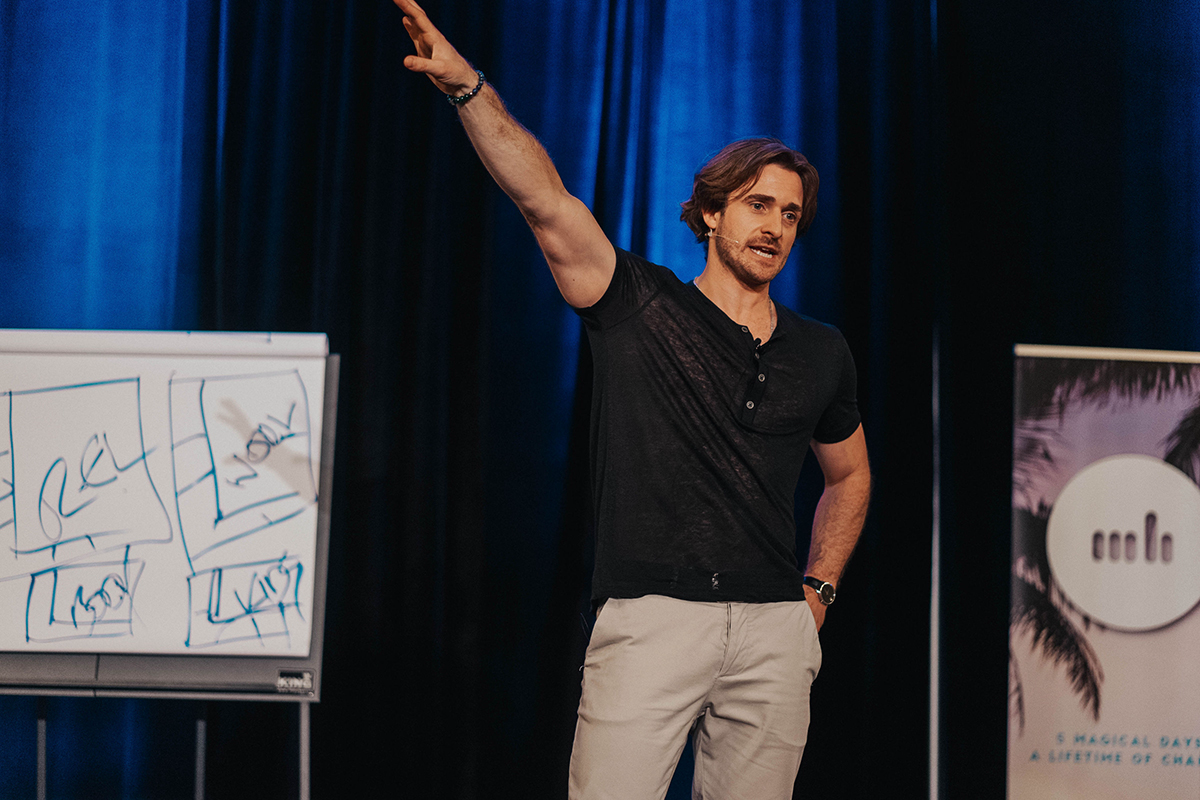 These retreats are personally led by him and a team of experts hand-picked by him. Over a period of 6 days, they coach 200-300 women on how to be their ultimate selves and find the guy of their dreams.

He is regularly booked for live events and talks where women can listen to him talk and learn from him. The prices depend on the events themselves, and some can even be free.

Finally, he offers private 1-on-1 coaching for $10,000 an hour. Probably the only thing on this entire list that can seem outrageous. It’s hard to believe any kind of dating advice would be worth this.

But the actual question we’re supposed to be asking is how much is it worth to him.

How much is it worth to Matthew Hussey?

When it comes to revenue, his brand probably earns most from their online programs and live events/retreats ($1.5-2.5 million/year just from the two live retreats). Which means it’s probably not that worthwhile to focus on 1-on-1 coaching. Especially if he doesn’t have enough prospective clients who’re willing to pay $10k/hr. 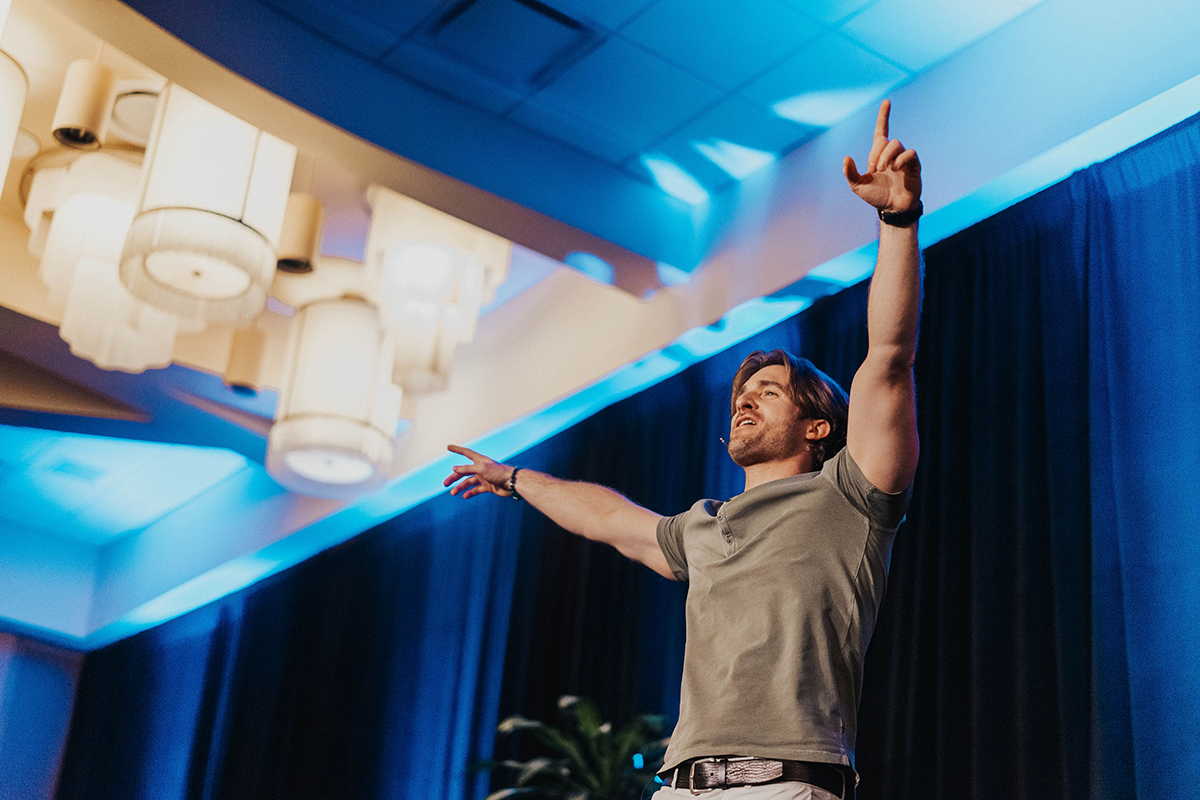 And then you have to consider how much time he’d even have to invest in 1-on-1 coaching. He is currently on a web series for ABC, a columnist for Cosmopolitan, regularly creates original content for his social media, and manages his company “Get the Guy”.

Ultimately, he is running a business and he has to prioritize his time. While his coaching is probably not worth $10k/hr for a client, it’s probably worth it for him. Because if it’s much less than that, he’s probably better off working on his other projects/work.

Finally, the price tag also serves to give him social proof, credibility, and helps with marketing. When we know he charges $10k/hr for 1-on-1 coaching, we’re more likely to pay $100 for an online program. And it helps with getting his name out there - we’re not the first ones who have covered his exorbitant rates.

Paying $10,000/hour for dating coaching is almost certainly not worth it - no matter who is giving the advice. Matthew Hussey isn’t even really popular for his 1-on-1 coaching, but his more generic advice that applies to more women at once.

And because of this, it’s hard to find a single coach that can work for everyone. If you’re looking to get 1-on-1 dating or relationship coaching, it can take a couple of attempts to find the right coach for you - someone who can operate on the same wavelength as you. 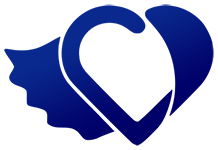 Want guaranteed results? Click here to chat with a Dating Coach who will help you figure out how to succeed in your dating life and find your perfect someone.