You Should Be a Shameless Flirt

There’s probably someone in your social group, a friend or acquaintance, that you’re at least a little romantically/sexually interested in. But you’d never pursue them – of course not, because that could easily go wrong and totally ruin your friendship, right? It hasn’t even crossed your mind to hit them up, because surely if you did, you’d both feel super awkward about it, right? Sending them a flirty text out of the blue is crazy, right?

Consider that there’s probably also someone else in your social group, someone who definitely isn’t more attractive than you, yet is getting better results in their dating life than you are. It’s the guy/girl you know who’s more of a shameless flirt than you.

The shameless flirts are the ones who’ve got it right, because flirting is nothing to be ashamed of. As long as they’re not taking it to the extreme, e.g. putting their hand on their friend’s husband’s leg under the dinner table, then that’s just an objectively true fact about the dating game. You, on the other hand – you’re someone who feels weirdly shameful about pursuing the people in your life who pique your interest. So we’re here to tell you: cut it out.

It’s time to become a shameless flirt by following this rule:

As long as there’s at least a 20% chance they’re into you, you should go for it. 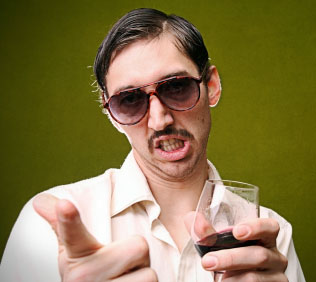 1. YOU HAVE NOTHING TO LOSE

You think botching an attempt at hitting on your acquaintance is going to screw up your “friendly relationship” forever? The relationship that consists of liking each other’s Facebook statuses and randomly mingling every few months, no thanks to any logistical effort on either of your parts? Maybe. (Probably not.)

Be realistic about what these random acquaintanceships are actually worth to you: not much. Worst case, if you end up having to cut off all communication with a casual acquaintance, you know you won’t miss them at all.

If you’re like most people, you only pursue targets that you’re 90% sure are into you – which is setting yourself up for failure.

Just think about it the other way around: Of all the people you’ve ever been interested in, most of them didn’t feel such a strong vibe from you that they were 90% sure about your interest. And you would have appreciated it if these people had lowered their certainty thresholds and made a move on you.

On the other hand, if you think there’s only a 1% chance that someone is into you, then of course it might not be worth going for it.

Conversely, you should feel bad when you make the wrong move. If you stop pursuing a 20% chance because you estimate (correctly) that you’ll probably get rejected, you’ve made the wrong move. Even though you’ll be watching a funny TV show in your room, safe from the threat of rejection because you didn’t try anything, don’t let yourself feel good. You should feel bad.

3. HAVE THE RIGHT ATTITUDE ABOUT DATING

With each acquaintance that piques your interest, your attitude should be that it’s better to hurry up and get a definite outcome from them – winning or losing – than to stay in limbo forever.

Or if you prefer a nautical analogy: as you cruise through life, you should always have your fishing net cast, constantly trawling for new catches. Quit chillin’ in your boat, pretending like the neighboring fish aren’t a big deal. Get the net out.

There’s someone in your life right now who you’ve got at least a 20% shot with. You’ve been helplessly ignoring them because if you try to pursue them, there’s still a high chance that they’ll reject you.

Now that you know the 20% rule, you can forget about expecting a sure thing in these situations. You can’t even expect an even chance. You should expect to constantly be flirting with people who are quite likely to reject you. No surprise why your intuition is screaming, “It’s a trap!” about the 20% rule.

But you want to become the kind of person who sucks it up and strolls into the trap with your head held high. That move feels way out of your comfort zone, like only a shameless person would do it – but it’s the right move. So do it.

Ready to follow the 20% rule and be a shameless flirt? Ok. Pick up the phone right now and text someone.